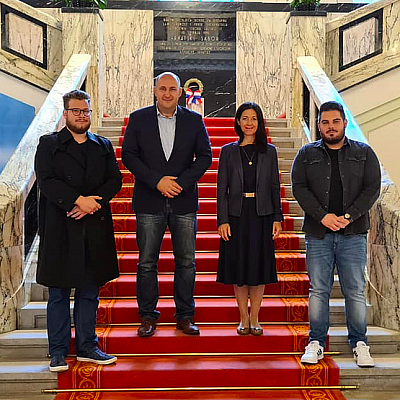 After a pause of more than a year, caused by the pandemic and the closure of borders and schools, students from Opava came to Daruvar, Croatia to do a two-week internship. Students visited the organization of the Czech minority in Croatia already on the first day of the internship (September 13), where they were welcomed by the chairwoman Anna-Marie Štrumlová Tučková.
The chairwoman of the Union of Czechs informed the students about the activities of the Czech community in Croatia and 32 Czech associations. Director Lidija Dujmenovićová and editor-in-chief Jana Staňová spoke about the newspaper publishing house Jednota in Daruvar. Marie Válková, director and vice-president of the Czech Union, mentioned how J. A. Komenský's Central Czech School in Daruvar works with district schools, how the Czech language is taught or how the Czech minority's education is organized in Croatia.
Four students from the field of Public Administration and Social Policy, who have been studying for the third year, took part in an internship from the Faculty of Public Policies of the Silesian University in Opava. Students Petr Štěpán, Daniel Kašpar, Jonáš Jelínek and Tadeáš Končický were accompanied in the first days of the internship by Mgr. Andrea Preissová Krejčí, Ph.D., were led by Táňa Novotná Golubićová, Deputy Mayor of Bjelovar-Bilogora County, and Dalibor Tomášek, Deputy Mayor of Končenice.
During their internship, the students got acquainted with the operation of representative bodies at the level of state administration and self-government, visited the Parliament of the Republic of Croatia, which was led by MP from the Czech and Slovak minorities Vladimír Bílek together with Tána Novotná Golubićová.