Total solar eclipse over the Antarctic 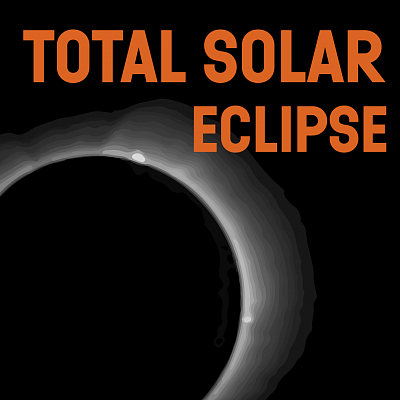 Total solar eclipse over the Antarctic

On December 4, 2021, the only total solar eclipse of the year occurred (next total solar eclipse will occur in april 2023). This time, the total eclipse belt passed through practically the least accessible area in the world - on the sixth continent, Antarctica. Petr Horálek from the Institute of Physics in Opava decided to go there and took several interesting photographs and recordings for the documentary work of students of the Multimedia Techniques of the Faculty of Medicine in Opava during the expedition. Now we bring you an interview with Petr Horálek, filmed shortly after his return to Europe, as well as resulting photography pictures of solar eclipse.
Despite all the complications, Petr Horálek from the Institute of Physics in Opava decided to participate in a relatively unusual international documentation mission: To observe the phenomenon at an altitude of 12 kilometers above the Earth in a special flight of Chilean airlines in cooperation with astronomers from the International Astronomical Union (IAU). The expedition had also other purpose and that was to acquire a unique audiovisual material for the documentary production of students of Multimedia Techniques at the Institute of Physics in Opava. The expedition was co-financed from the R&D Development at SU project, registration number CZ.02.2.69 / 0.0 / 0.0 / 18_054 / 0014696. How did the whole observation go? You will find out in the following video.
During the eclipse, in addition to the majestic solar corona, he discovered a really striking moon shadow, which was sharply projected into both the sky and the cloud-covered view below the plane. Both aircraft flew in parallel (which was not originally planned, but for better coordination they eventually moved closer to each other). As a result, an unusual photograph was created - a view of the shadow of the Moon, the eclipsed Sun, the aircraft's engine and even the second aircraft. The following day, on December 5, 2021, the wide-angle shot was published as a NASA's astronomical picture of the day.

You can enjoy the total solar eclipse and the movement of the moon's shadow over the Southern Ocean from 12.5 km above the ground from two opposite windows of the CC-BBD B787-Dreamliner in the composite time-lapse video below. Authors: Cătălin Beldea, Petr Horálek / Institute of Physics in Opava, Music: Stan Dart / ESO.

"During the solar eclipse flight on December 4, I was able to record both detailed and widescreen data to create a solar corona composite beyond the sight of the naked eye. The longer exposures allowed me to capture even bright stars and it seems that the entire constellation of Scorpio appeared in the shadow of the moon, as well as the planets Mercury and Mars. This was the highest altitude I've ever photographed the stars from, about 12.5 km above the ground. What a feeling! ”as Petr Horálek describes the pictures below. 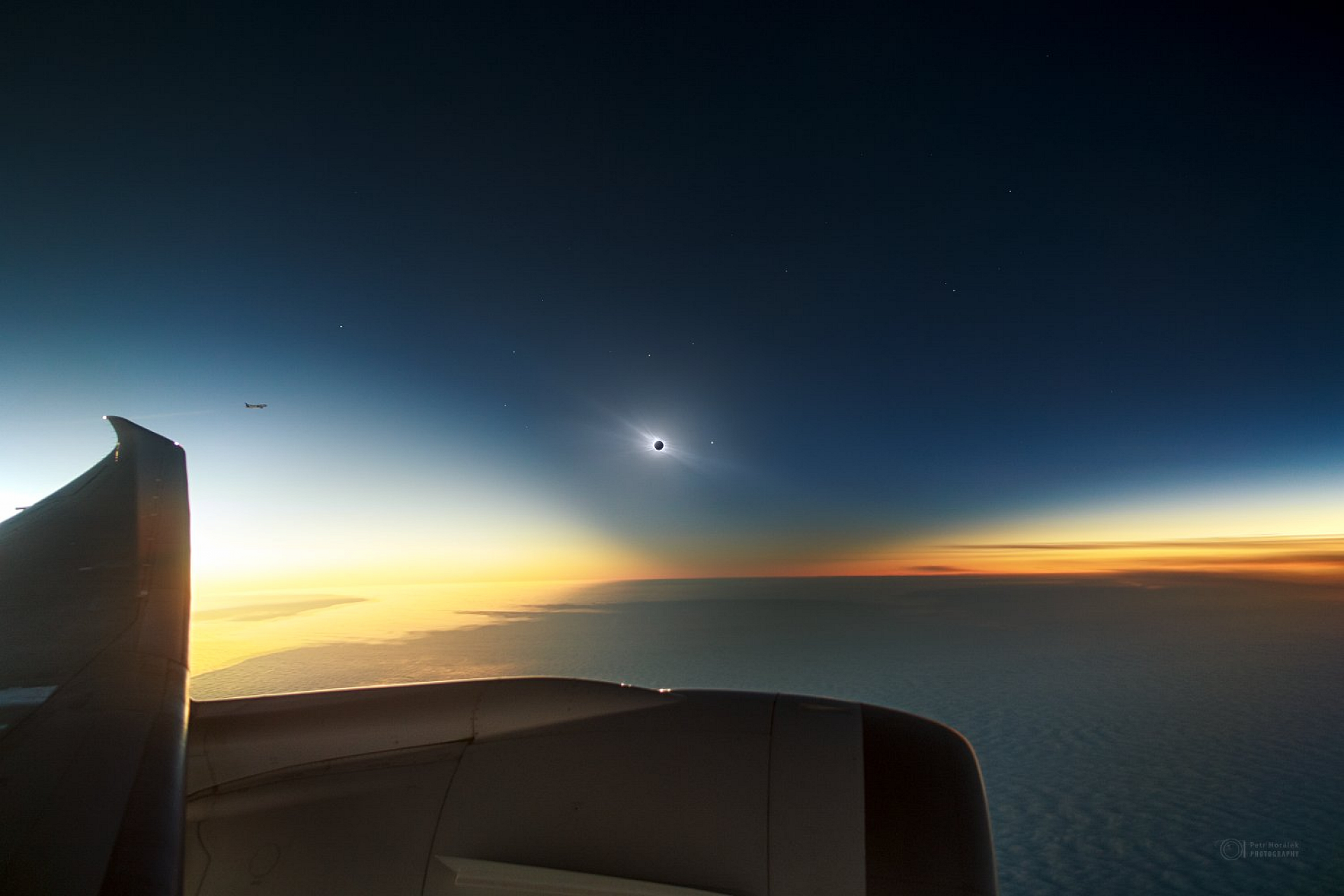 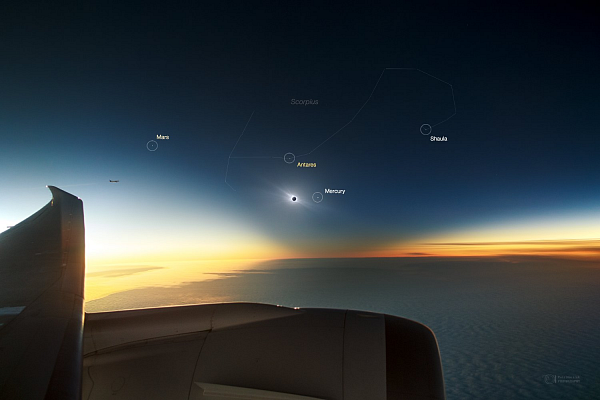 Despite the problematic photography through the glass of the aircraft, more exposure photographs of the solar corona were taken at the time of the maximum total solar eclipse. The image was created from a series of exposures via Canon Ra and Tamron 70-200 mm (set to 200 mm) at 2.8 and ISO 800. Exposure series 1/4000 s, 1/2000 s, 1/1000 s, 1/500 s, 1/125 s, 1/60 s and 1/25 s were repeated 4 times during stabilization, thanks to which noise could be suppressed by mathematical averaging for each exposure and the image thus remained somewhat cleaner. Because of the long exposures it was possible to isolate brighter stars (the brightest object there is the planet Mercury). The image shows the inner corona of the Sun with relatively intricate structures, especially in the upper left part (the orientation remained the same as during observation of the eclipse: the southern solar pole is at the top right, the north at the bottom left). 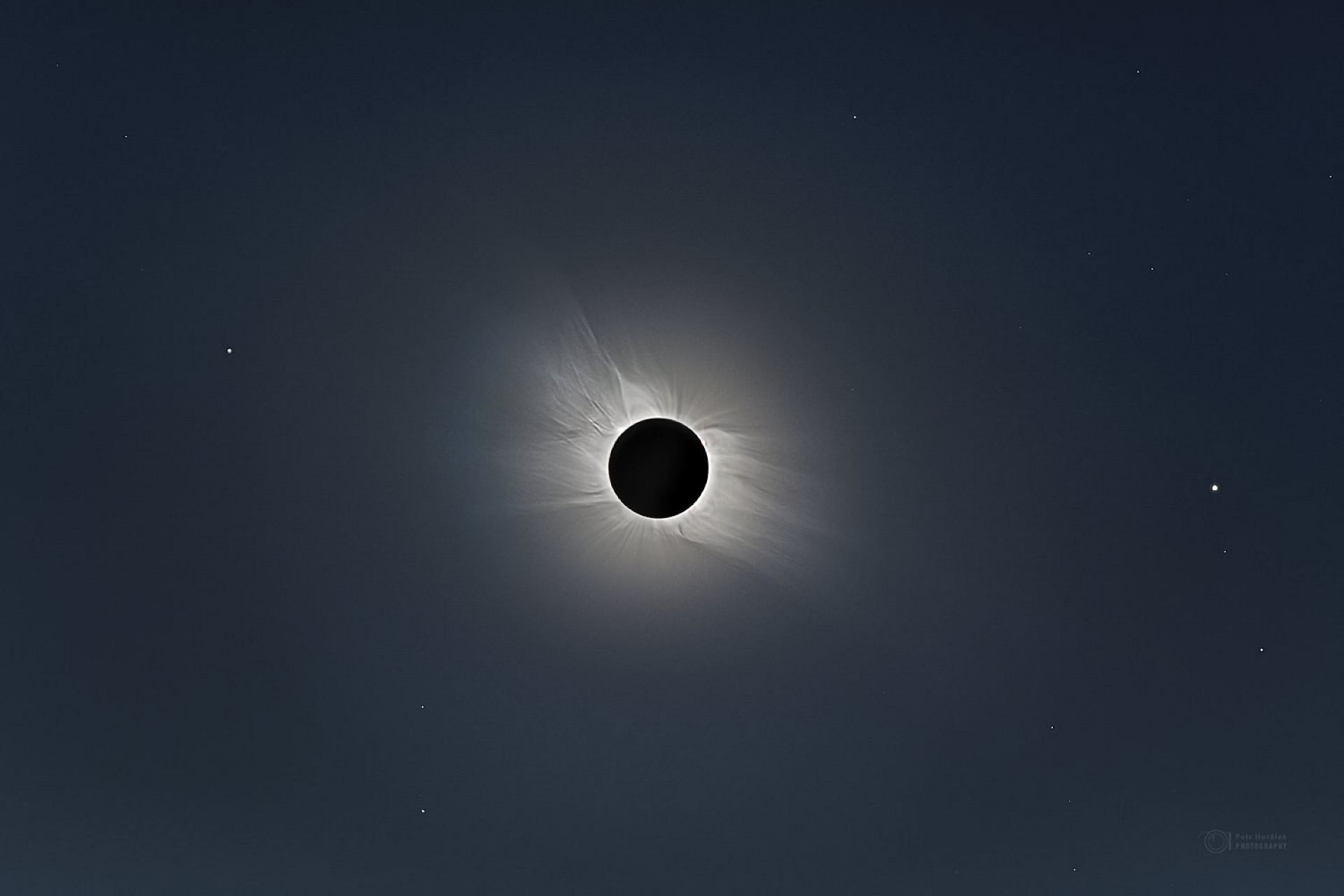 During the event, a clear zone was visible even by eyes, which belonged to the more active areas of AR 2898 and AR 2900. In these places, in the period of several hours around the time of the eclipse, several minor eruptive events occurred radially moving in the direction of observation (ie they went "to the side"). And that is the reason why the solar corona, formed by charged free electrons in the Sun's magnetic field above this region, appeared so complicated. Below is a gallery showing the active area in a photograph by Petr Horálek and further from the NASA / Solar Dynamic Observatory and SOHO (NASA / ESA) satellites in a composition with captured images from the aircraft. 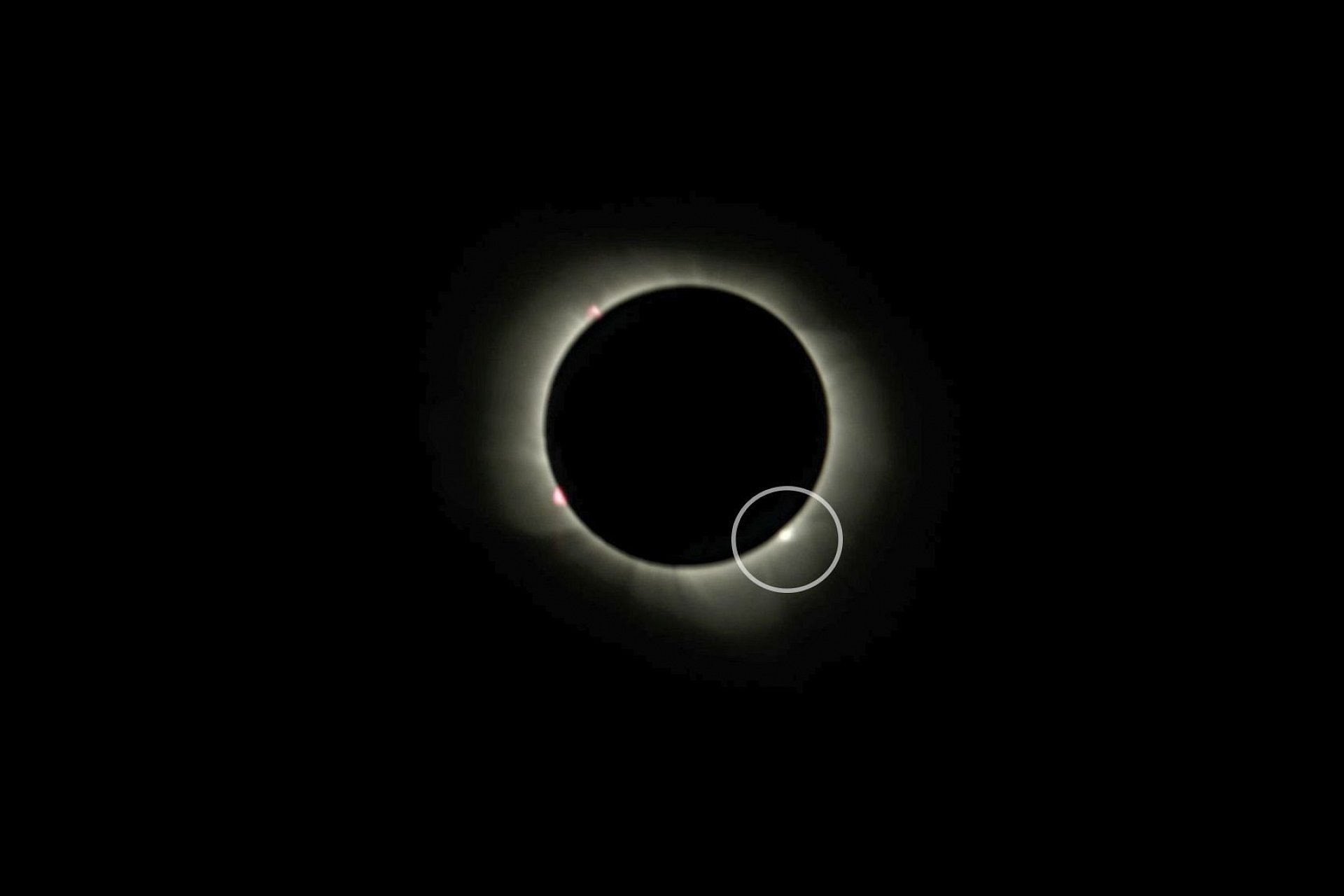 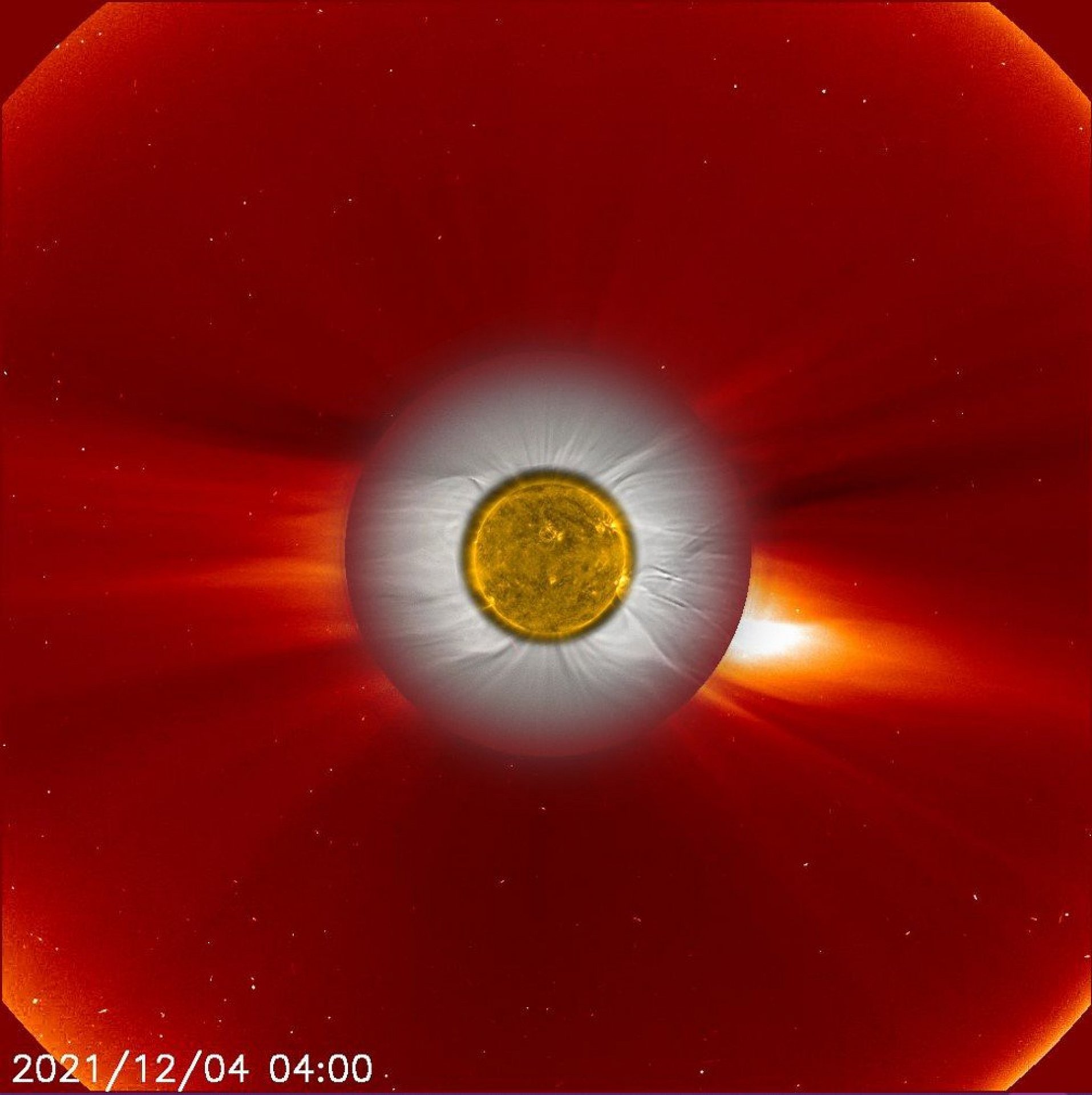 A combination of a image from the LASCO C2 coronograph of the SOHO satellite, the Sun in the extreme ultraviolet region in the AIA 171 camera of the Solar Dynamic Observatory satellite and the solar corona captured during a total solar eclipse on December 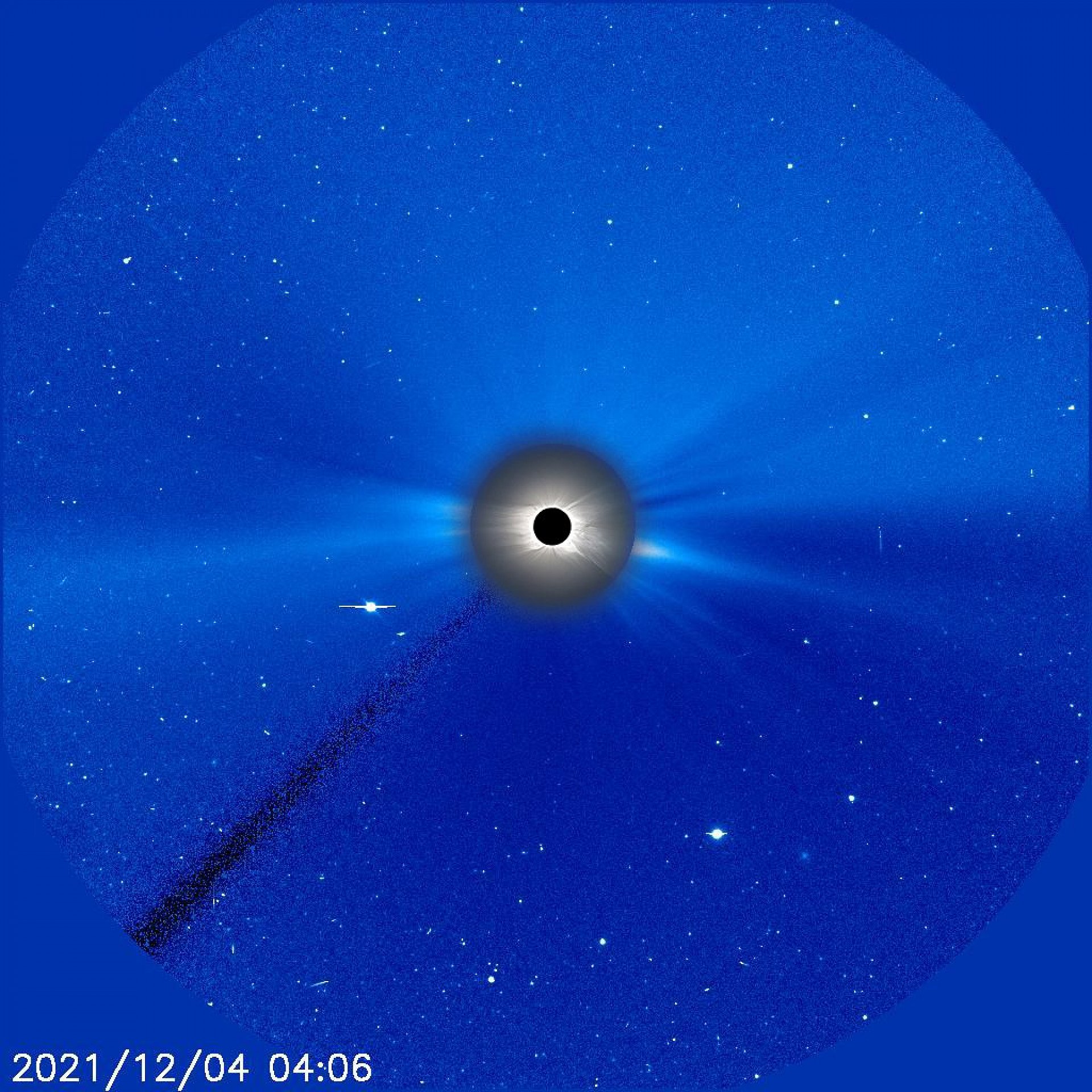 A combination of a shot from the LASCO C3 coronograph of the SOHO satellite and the solar corona captured during a total solar eclipse on December 4, 2021 from the aircraft (the image has a north-south orientation). Photo: SOHO / NASA / ESA, P. Horálek /