University  /  About university  /  HR Award
In August 2021, the Silesian University was awarded the prestigious HR Excellence in Research Award. This guarantees scientists and academics high quality of the working environment with European standards in employee care, as well as the openness and transparency in recruitment. By fulfilling the strict conditions of the European Commission, the Silesian University has strengthened its attractiveness for cooperation with top scientists not only within the European Research Area.

Oops, there's no news for you in the moment :-( Maybe next time!
All news

The award was given on the basis of the submitted GAP analysis and an action plan for the adjustment of personnel policy, which is in line with the principles of the European Charter for Researchers and the Code of Conduct for the Recruitment of Researchers. The Silesian University succeeded in submitting the first application. It thus joined the ranks of another ten Czech public universities with the right to use the HR Award logo. Only one private university in the Czech Republic can use the logo as well.

Our researchers were intensively involved in the creation of the GAP analysis and the action plan in the form of a questionnaire survey or structured interviews. Based on the findings, the HR Award Steering Committee then proposed changes to the university's personnel policy. All proposals were assessed and commented on by HR Award working groups, which consisted of scientists of all levels (R1-R4). Our scientific and academic staff are therefore involved in all steps of personnel policy reevaluation. 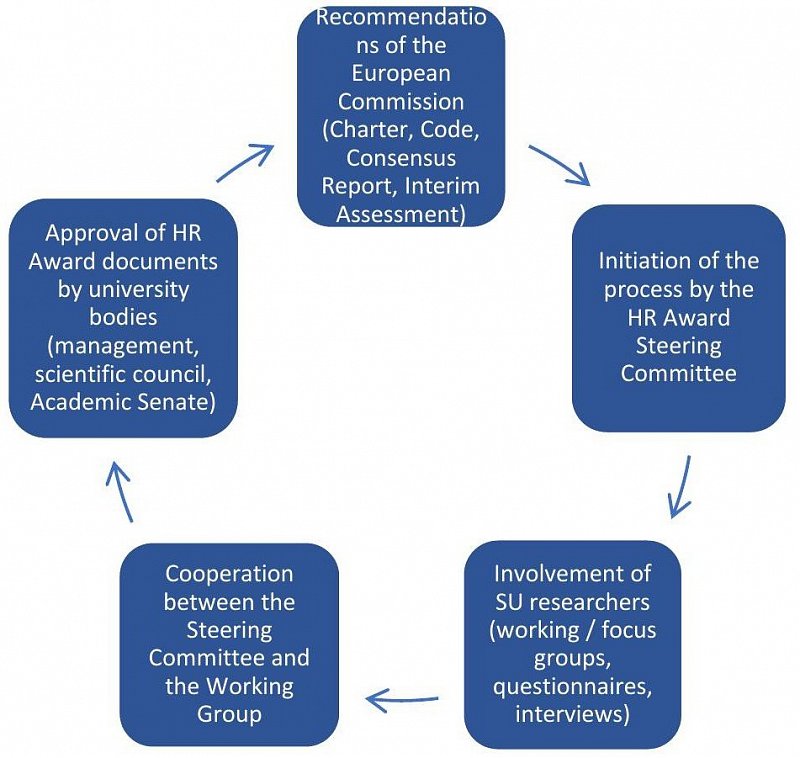 The revised action plan is going to be gradually implemented. As a result the university will soon have:

The long-term sustainability of the action plan will be ensured by the implementation of the University's Strategic Plan for the period from 2021. The measures in the action plan will be further developed by the Strategic Plan, in particular through Part E, which declares the university's measures in the area of personal and career development of employees. It is also necessary to add that the fulfillment of the strategic plan is regularly assessed in the framework of annual evaluations.

Schedule for the implementation of the action plan

What it will bring us?

Following the implementation of the questionnaire survey, the topics of the focus working groups composed of members of Working Group I and supplemented by a representative community of researchers of category R1-R4 were defined. A description of R1-R4 researchers' levels can be found https://euraxess.ec.europa.eu/europe/career-development/training-researchers/research-profiles- descriptors.