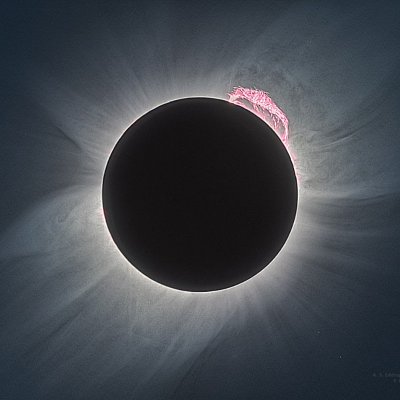 It has been 102 years since the Royal Greenwich Observatory's expedition, during which the iconic general theory of relativity by Albert Einstein (1879-1955) was confirmed. As is well known, Einstein began his thought revolution in physics in 1915 with a series of lectures at the Prussian Academy of Sciences. During these Einstein faced constant pressure, as in the interwar period, his strong pacifism and Jewish origins provoked efforts to have him discredited. Fortunately, Einstein's physical theory crossed the line and fell into the hands of British scientists, who decided to confirm it with an experiment on an expedition to observe a solar eclipse.

One of the many consequences of general relativity is the fact that the light from a distant source may deviate slightly in its path due to the gravitational pull of another physical object. Therefore, according to the general theory of relativity, the Sun should, with its gravitational action, deflect the light of the stars passing in its vicinity, which would be reflected in the photograph of the stars by their shift away from the Sun. The question was whether this theory could be verified in practice. Scientists from the Royal Observatory tried to do so - they took advantage of a total solar eclipse on May 29, 1919, when the dazzling solar disk was obscured by the moon and faint stars in the constellation of Taurus appeared around it for several minutes. These stars were then theoretically supposed to be slightly misplaced compared to when our parent star is not between them and the observer. Ingenious, simple, feasible, observable!

However, at the beginning of the 20th century there were no digital cameras with high megapixel resolution, nor were there travel agencies and accurate weather forecasts or satellite images. Back then, astronomers had to spend a great deal of diplomacy and adapt the expedition so that the phenomenon could be recorded on photographic plates with sufficient quality. Despite the complications brought about mainly by World War I, on November 10, 1917, the British Standing Committee on Solar Eclipse decided to organize an expedition to the belt of totality of the long solar eclipse on May 29, 1919

There were two expeditions, coordinated by Frank W. Dyson (1868-1939) and Arthur S. Eddington (1882-1944). It was the end of the First World War that finally helped the scientists, the carefully packed instruments were taken to Liverpool, from where the two expeditions traveled together aboard the steamer Anselm on Saturday, March 8, 1919, to Madeira. One of them - led by Andrew C. D. Crommelin (1865-1939) - traveled to Sobral, Brazil. Eddington then led an expedition to Prince's Island in the Gulf of Guinea. Both expeditions experienced problems with clouds during the eclipse, but eventually produced several pictures of sufficient quality on photographic plates, which were then despite travel complications successfully brought back to Britain in July and August of the 1919.

Despite the problems, the results were truly excellent and ensured scientific recognition for both the members of the expedition and Einstein himself. The stars surrounding the Sun during the eclipse were bright enough to compare with their positions on the plates taken later - when the Sun was not between them. It turned out that their position is actually deviated by up to 1.75 arcseconds due to the gravity of the Sun. The results gradually traveled the world, as did the images of the eclipse itself taken on those glass plates. But the question arises - what happened to the photographed materials? Unfortunately, the original plates from the 1919 eclipse were lost, but fortunately copies were made of one of them and distributed to observatories around the world so that all scientists could see for themselves the evidence supporting the theory of relativity. One copy of the film from Sobral also reached the Heidelberg-Königstuhl Landessternwarte, which recently digitized it as part of the Heidelberg Digitized Astronomical Plates (HDAP) project. And with that began a whole new story, which resulted in a prestigious award by NASA.

Petr Horálek from the Institute of Physics in Opava, in cooperation with the European Southern Observatory, obtained a digitized copy of the original record in the highest possible quality. At first glance, it was clear that the image quality was far from the current possibilities, in addition, the scan was scratched and full of dust particles. It is also quite clear that at the time of the eclipse, the clouds were indeed hampered in Sobral.

It was necessary to adjust the digital form of the glass plate so that some of the artifacts disappear and conversely bring out the actual structure of the corona. The result was then processed by the sophisticated NAFE program developed by Professor Miloslav Druckmüller from the Brno University of Technology. The program can use the so-called Fourier transform to highlight even fine details in the structures of otherwise rather blurred images, thanks to which it was possible to obtain nicer details in the solar corona, and even more in the protuberance, which then appeared during the eclipse. In the end, from the well-known color properties of some phenomena in the picture, Horálek was able to very faithfully reconstruct the color of the entire image, which was previously only available in black and white. Thus, for the very first time in the history of mankind, people are shown the famous "Einstein" eclipse in colors and with fine details.

What do we see in the picture? In particular, the dark lunar disk obscures the dazzling solar disk, which reveals a faint structured solar corona - a flared plasma envelope of the Sun shaped by its magnetic field. Its structure was quite complicated - the eclipse took place about 2 years after the maximum of solar cycle number 15, so you can see numerous magnetic loops, but also recognize the solar magnetic poles (top left, bottom right) and long equatorial coronal rays. But the most breathtaking is the pinkish protuberance - a cloud of cooler plasma hovering over the sun's surface. Such a giant protuberance is a very rare phenomenon during a total solar eclipse and is probably the largest ever captured photographically during a solar eclipse.

NASA's Space Science Association (EPOD) geoscience film is an acclaimed award for the most interesting astronomical, atmospheric, or geological photograph of the day, carefully selected for each day by Professor James Foster, a researcher emeritus at NASA's Goddard Space Center. It was created in 1999 as a separate "branch" of the prestigious Astronomical Image of the Day NASA. In contrast, it is more geoscientific - in addition to astronomical images, there are also published geological, meteorological, chemical or atmospheric images. In addition to EPOD, the film was presented on the prestigious scientific server Spaceweather.com.

The Institute of Physics in Opava, which is focused, among other things, on scientific research into the consequences of the famous Einstein's theory, also wanted to draw attention to the round anniversary of the award of the Nobel Prize to this famous physicist. Just 100 years ago, on March 30, 1921, he went to New York to lecture on his theory. However, he won the Nobel Prize for his work on the photoelectric effect. The commission of the Royal Swedish Academy of Sciences then agreed that less controversial older work was more politically appropriate. Today, however, the theory of relativity is a fundamental pillar for the physical understanding of the universe. 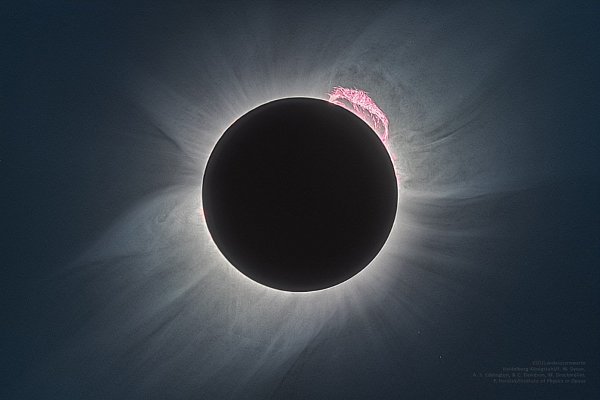