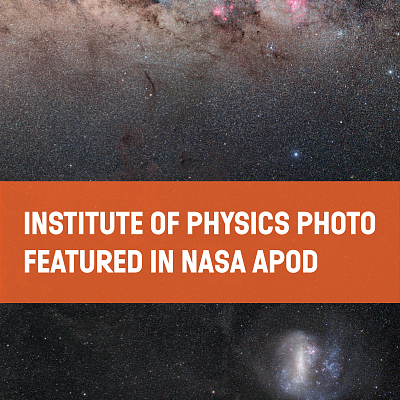 On the first day of 2021, the NASA institute published the photo "Galaxies and the South Celestial Pole" by Petr Horálek and Josef Kujal in the prestigious APOD collection. The photo was taken during the 14th of December Full Solar Eclipse Expedition, backed by the Institute of Physics in Opava and the international project Solar Wind Sherpas of the University of Hawaii. The photo shows a deep field in the vicinity of the south celestial pole dominated by three galaxies – a part of our own Milky Way and two satellite galaxies known as Magellanic Clouds.
Despite the exceptionally difficult travelling circumstances due of the COVID-19 pandemic, the team managed to get to Chile with the support of the Solar Wind Sherpas project backed by University of Hawaii, Institute of Physics of the Silesian University in Opava and the Brno University of Technology. The expedition was met with several logistical problems before it even started, but through all the struggle the team managed to get to Chile in time. However, due to unfavourable weather conditions, the fascinating event of a full solar eclipse could not be documented. As a set of secondary objectives, the team chose astrophotography. One of these was the mentioned photos "Galaxies and the South Celestial Pole" which got published in APOD on the New Year’s Eve. The footage of the expedition and its results will also be used for both scientific and educational purposes. For example, as material for the documentary by the Multimedia Technology institute of the Silesian University in Opava. The journey of Petr Horálek was also backed by projects of the European Union and the Ministry of Education, Youth and Sport of the Czech Republic, in particular the project Inter-Inform LTI17018 and ESF Project CZ.02.2.69/0.0/0.0/18_054/0014696 Rozvoj VaV kapacit Slezské univerzity v Opavě.

The authors of the photo are Petr Horálek, an employee of the Institute of Physics in Opava and Josef Kujal, member of the Astronomical Society of Hradec Králové. For Petr Horálek, this is the 27th publication with NASA. The Photo was taken in the early morning hours on the 16th of December 2020 in the gardens of an accommodation centre Mirador de Puccon with very good lighting conditions (minimal light pollution). To capture this photo, they have created a very precise collage of 4 photos that were taken sequentially and capture roughly 60 degrees of the night sky. The equipment used was an especially sensitive DLSR camera canon 6D and a 50mm low light Sigma lenses. All the captured segments were then put into one large picture.