The Institute of Central European Studies

The study will provide a module-structured set of knowledge on modern history, on political, administration and legal systems and on different aspects and current problems of economic, social, national and cultural development of Central Europe from the end of the 18th century to date. The concept of the Central European transnational region is based on combination of geopolitical and historical or cultural-historical perspective; additionally to the countries of the Visegrád Group (Czech Republic, Slovakia, Poland, Hungary), also Germany and Austria are studied. Such broader approach is reflected particularly in observing the modern history, but also the current economic, administration, legal or cultural issues. In the context of political development, the area of Central and partially of Eastern Europe is depicted, including observation of the role and influence of Russian in the area.

Due to the geographical extent of the territory under observance and to the complicated character of the problems existing there, the branch is designed in interdisciplinary and comparative manner; it should develop the students’ ability of critically analyzing comprehensive issues and seeking independent solutions. At the same time, it should increase the penetrability of study programs at FVP SU by interconnecting the historical branches with studies of public administration and regional policy. The acquired theoretical knowledge and practical skills will allow the graduates acting in a broad spectrum of authorities and organizations, from state administration to private businesses, or continuing in subsequent Master studies with political-scientific, historical or administrative orientation. 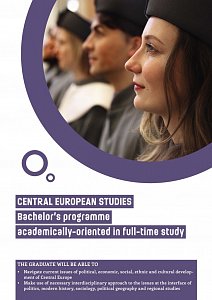 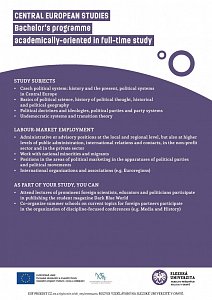 The study programme has interdisciplinary character, on the boundary of political science, sociology and modern history, allowing interconnection with social-scientific and administrative branches at other faculties of the Silesian University, as well as at other universities of the region. The studies are divided into four branch blocs: the first is devoted to methodological and theoretical issues of social sciences; the second to political, social and economic processes in postwar world, particularly in recent two decades; the third to analysis and comparison of the processes in the area of Central, or from the perspective of former Soviet Bloc, Central-Eastern Europe, under consideration of the issues of different types of political and administration regions; and the fourth to the development of managerial, information, communication and language skills. The synergic character of the studies, in which the knowledge and skills acquired in compulsory subjects are further developed in compulsory-optional subjects offering the students also the opportunity of some specialization, is supported also by the emphasis put on the social-scientific methodological preparation and involvement of the students in the research activity of the centre. Thus the study branch extends and deepens the competences acquired at Bachelor degree, preparing the students to continue in Doctoral studies.

The goal of the studies consists in mediating knowledge of main trends of political, social and national development of Europe in the 20th century, with accent on the Central European region and with regard to distinct globalization changes of the turn of the 20th and 21st centuries. At the same time, emphasis is put on deepening of the theoretical-methodological component of studies, on its comparative and interdisciplinary character, on mastering of research techniques and methods and on involvement of students in the research activities of the relevant centre, during which they have opportunity to cooperate with teachers with significant research and publication activities. The teachers also guarantee the subject structure and the topicality of the contents of the individual subjects. When meeting the goal of the branch of study, international contacts of the centre play an important role and are reflected in common research and educational projects, international workshops, conferences and mobilities, including students’ involvement. The participation of foreign experts, primarily from Slovakia and Poland, in the lessons supports the comparative character of the studies. 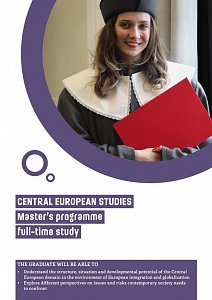 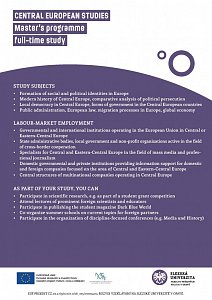 The Doctoral study program of Historical Sciences, the study branch of Modern History of Central Europe is designed in compliance with the principle of structured three-degree university studies and ranks among developmental priorities of the Silesian University in Opava. It offers postgraduate education to graduates from Master studies of historical sciences and related branches, particularly with focus on the history and the present of Central European countries, who strive for deepening of their theoretical knowledge and professional skills of historical and interdisciplinary character. The preparation of the study program, branch and their subsequent implementation is performed by the Institute of Central European Studies of the Faculty of Public Policies in Opava. Its permanent employees devote their research and publication activity in the long term and in great detail to the issues of Czech and Czechoslovak history of the 20th century in the Central and Eastern European context, particularly with focus on the issues of development of the status of nationalities and national minorities and nationally mixed regions of Central Europe and on the history of totalitarian regimes, political persecution and compensation of their victims. Their research continues the activities of the Silesian Institute of Opava where many of them worked before.

The employees of the Institute cooperate closely with professionals from other centres of the Faculty of Public Policies and of the Faculty of Arts and Natural Sciences of the Silesian University in Opava, particularly with the Institute of Historical Sciences. The Institute of Central European Studies and other centres of the Faculty of Public Policies maintains research contacts also with a number of scientific and university centres of the Czech Republic (Institute of Modern History of the Academy of Sciences of the Czech Republic, Institute of Legal History of Charles University in Prague, etc.), of Slovakia (Fakulta verejnej správy Univerzity Pavla Jozefa Šafárika v Košiciach, Spoločenskovedný ústav Slovenskej akadémie vied v Košiciach) and of Poland (Uniwersytet Wrocławski, Uniwersytet Opolski w Opolu, Państwowy Instytut Naukowy – Instytut Śląski w Opolu, etc.). They cooperate with universities of Germany, Poland, Slovakia, Slovenia, etc. within teachers’ and students’ mobilities. 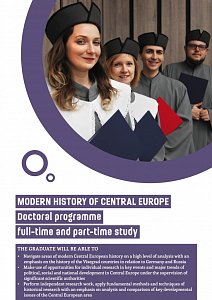 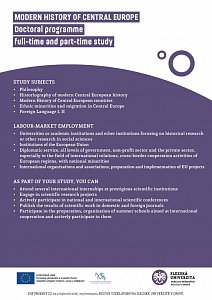