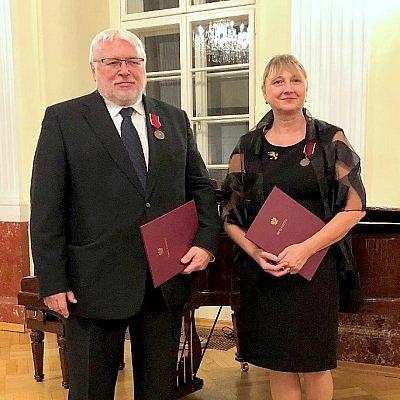 It was awarded by the Minister of Foreign Affairs of the Republic of Poland for merit in strengthening Poland's position in the international space. Both were awarded not only for their membership in the Organizing Committee of the 1st Congress of Czech Polish Studies, but also for their long-term cooperation with Polish partners and activities related to research and presentation of Polish history, contemporary events and Czech-Polish relations. They also belong to the founding members of the Polish-Czech Scientific Society (Polsko-Czeskie Towarzystwo Naukowe). From the very beginning they participate in the management and activities of the International Center of Silesian Studies, prof. Žáček had a significant influence on the profiling of the Conference of Rectors of Silesian Universities.

The Deans of both faculties of the Opava Silesian University received the award together with other important representatives from the Czech and Polish academic environment at the end of the 1st Congress of Czech Polish Studies. It was created on the initiative of the aforementioned Polish-Czech Scientific Society, in cooperation with eight institutions in the Czech Republic, and aimed to balance Czech research on Poland, its facts, history and language, and to promote knowledge of Poland and Polish-Czech relations. The congress took place during the autumn months in Olomouc, Brno, Hradec Králové, Pardubice, Liberec, Prague and also in Opava.

The Silesian University in Opava hosted a congress on November 5 - 7, 2019, when the Faculty of Public Policies in cooperation with the Faculty of Philosophy and Science organized an international conference entitled The Image of Poland and Poles in the Czech Media (more about the conference here).